On March 17th, the students were introduced to their new software friend, Siri. Currently available on the iPhone 4S as a personal assistant and search-tool, Siri must be spoken to in clear English in order to respond to commands. Typically, these involve things like making appointments, writing notes and messages, and searching for answers on the web without having to type. We focused on the latter during class time, with each class being divided into two groups in a friendly competition using a task list worksheet as their guide. 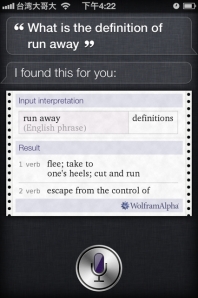 During this virtual scavenger hunt, the students had to ask Siri questions from six categories: definitions, translations, famous people, cities and states in the Untied States, measurement conversions, and stock prices. For this class, using correct grammar was only half the battle, with the more difficult half being pronunciation. 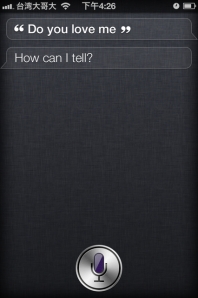 Siri is known for having trouble even with some native English accents, the Boston accent’s peculiar “-ar” sound and the American South’s drawl being two examples. In order to be understood, the students had to annunciate each word clearly, loudly…and sometimes very patiently. When Siri gets confused she can produce some bizarre results. She was also on the receiving end of some unexpected comments with one student asking, or perhaps pleading, “Do you love me?”

Silliness aside, working with Siri was a nice relaxed moment for the students where they could focus on being heard and hearing each other speak, while learning some new things in the process.